Southern Baptist Theological Seminary celebrated its historic past and looked to the future at the school’s annual Heritage Week celebration, October 11-14.

To mark the event, Southern hosted three chapel services, two of which were preached by SBTS President Albert Mohler. many other events.

In his October 11 sermon, Mohler examined one of the most important texts on the implications of The resurrection of Jesus in 1 Corinthians 15. If the resurrection is not true Christians are to be pitied.

“If we are looking for a chapter in the whole Bible that puts the historical facts of Christianity and the central doctrines of Christianity in their compressed form, then clearly states that this is how the church is to preach and that is what the church believes, it’s that passage, ”he said.

Mohler chose the text because Paul explicitly confronts the question “What if it wasn’t true?” “

Paul may have made a strange excuse argument, but Mohler linked Paul’s conclusion – that life is vanity if Jesus remained in the grave – with the 19th century philosopher Frederick Nietzsche.

Mohler said: “Nietzsche died in 1900 and was the prophet of modern aggressive atheism. Not only a skeptic against Christianity, but the man who said ‘God is dead, and we have killed him.’ Mohler continued: “We are futile. The people most to be pitied, according to Nietzsche. But the apostle Paul got ahead of Nietzsche on this argument.

In his October 12 sermon in the Broadus Chapel, Mohler unpacked Matthew 17: 1-13 on the transfiguration of Christ.

“The normative experience for the Christian will be that this vision of the transfigured Christ comes to us on the day of the Lord. Mohler continued, “But Christ was transfigured on that high mountain so that Peter, James, and John could see him.”

In addition to confirming Jesus as the Messiah, the Transfiguration testifies of Jesus as the fulfillment of the law and of the prophets. The appearance of Moses and Elijah therefore attests to the superiority of Christ.

Mohler summed up the proclamation of God from the clouds.

The disciples had obeyed Moses and Elijah, but now they have been told to listen to Jesus because the law and the prophets designate him. Mohler pointed out that Scripture is the way to hear Christ today.

“In worship we come and hear Christ. We do not have access to listening to Jesus except through the Scriptures. Mohler said: “The singular voice of God is the voice of Christ. The only Jesus who saves is the one witnessed by Moses and Elijah and revealed in the Scriptures. “

Tribute to the work of Craig Parker

Mohler paid tribute to longtime administrator Craig Parker at a luncheon Wednesday for his many years of service at Southern Seminary, calling Parker “one of God’s most faithful servants.” 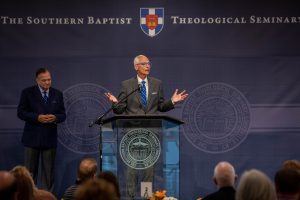 Parker retired last summer after serving as Senior Vice President of Institutional Administration since 2017. Overall, Parker had held various positions at SBTS since 2011 and will remain as Special Assistant to the President.

Prior to coming to Southern, Parker was a senior administrator for 15 years at Bellevue Baptist Church in Memphis, Tennessee, with famed Pastor Adrian Rogers, one of the most important figures in the conservative resurgence of the Southern Baptist Convention.

“The privilege of working with a man like Craig Parker is rare and extremely appreciated,” Mohler said. “He is a man of unchallenged personal integrity. Each ‘I’ is dotted, each ‘T’ is crossed out. He is a man of incredible dignity. I never had to worry about Southern Seminary being embarrassed by Craig Parker.

“He had an incredible impact on this school in a way that was both visible and invisible. I was able to sleep at night knowing that everything in his charge was safe. It’s a great gift. I also enjoyed working with him as a personality. It is an outgoing, warm and receptive kindness.

Parker’s wife, Selwyn, also served the seminary community for many years as a Disciple-Making Group Leader for the Seminary Wives Institute and as a weekly volunteer in the Southern Exchange.

Mohler presented Parker with a page from the King James Bible of 1611. Mary Mohler also paid tribute to Selwyn Parker, who served the women of Southern for many years through mentorship and the Seminary Wives Institute, as well as volunteering for The Southern Exchange.

“She will continue in these roles,” said Mary Mohler. “We are happy that they are not going anywhere.

Parker attributed his work to Southern to the grace of God.

“If there is anything good that comes from our lives, it is the Lord Jesus, and he has invaded our lives with abundant grace in the places he sent us and the people we have with. could be were just amazing, but none like this place and none like this people. I want to thank the Lord for what he has done for us.

Robbie and Sarah Brown received the Bruce W. Benton Distinguished Service Award at a dinner Wednesday. The Browns have been heavily involved in Southern for over a decade, contributing to the Heritage Golf Classic each year, establishing the Hispanic Initiative in 2017. 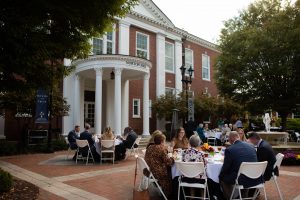 Bruce Benton, who died in 2001, was a director of SBTS and has been described as a man of “strong character and commitment”. He is originally from Hamilton County, Tennessee. He attended the University of Tennessee at Chattanooga and served in the Tennessee Army National Guard and was honorably released as a first lieutenant. From 1953 to 1974, he was associated with Benton Oil Service, Inc. as vice president and secretary. From 1974 to 1997, he was president of United Pump and Controls, Inc.

Donors from across the United States traveled to SBTS to attend Heritage Week where they met faculty members, attended church services with students, and watched a live recording of The Briefing with the President Mohler. Donors also attended a traditional dessert fraternity at the President’s house. As in years past, Mary Mohler has prepared a variety of homemade desserts that are loved and eagerly awaited by everyone.

“This is our opportunity to express our appreciation for their financial partnership in keeping our study programs accessible and affordable for our students. It also allows us to demonstrate our stewardship of their giving by allowing them to interact with our students and faculty, pray with us in chapel services, and enjoy our community on campus during the best time of the year. year, in the middle of the fall semester. . “